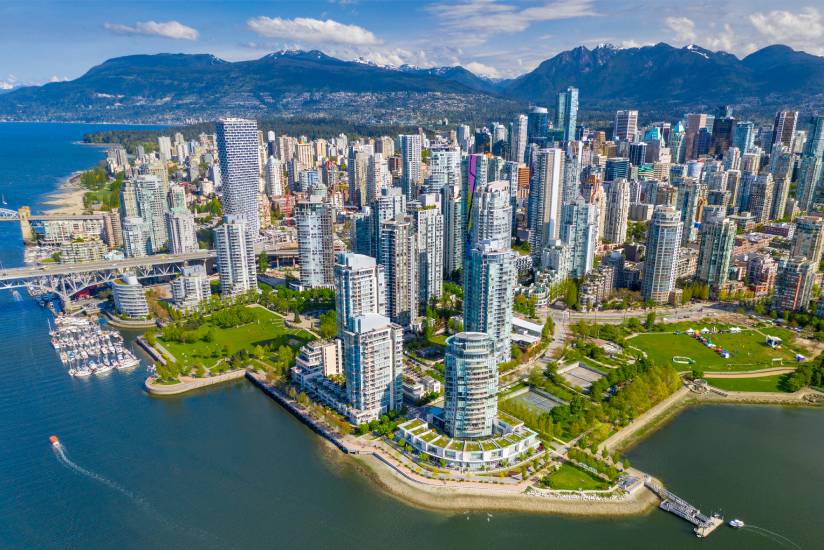 Vancouver is one of the most dramatically situated cities in the world. Surrounded by the Coastal Mountain range, including the ski-resorts of Grouse and Cypress, Vancouver is the destination of choice for ski junkies, mountain bikers and all outdoor enthusiasts.

It’s no coincidence that the car registration plates in this province all say “Beautiful British Columbia.”

It’s got mountains, beaches, trendy little neighbourhoods, and it’s only a 2-hour drive from Whistler – one of the world’s top ski resorts….what’s not to like?!

There is surfing too, but you need to go to the west coast of Vancouver Island for that.

Known also as Gastown, after one of its early neighbourhoods, Vancouver is definitely more laid back than Toronto.

Don’t be expecting high fashion here as people are more likely to dress in gym gear than Gucci.

The city and its people are really welcoming.

Walk into any of the bars in Gastown or down along Granville St. and you’ll quickly see what we mean. You’ll notice that many bars do prefer and even insist on table service so keep this in mind – probably something to do with the tipping.

Some of our favourite bars include The Blarney Stone and The Lamplighter in Gastown, and Moose’s Down Under at Pender and Hornby in the financial district of downtown – all are great craic on a Friday night after work.

Like Toronto, there are also plenty of sports clubs and other activities that you can fill your time with. In fact, Vancouver probably has more to offer when you consider the ski hills of Grouse and Cypress Mountains that you can hit at the weekend. You even have Whistler just two hours down the road if you want to change things up or try a bit of mountain biking in the summer.

Not to mention, there are four Aussie Rules clubs, a similar number of GAA clubs, and plenty of rugby, soccer, athletics clubs and gyms too. You also have Stanley Park to walk, run or cycle in so if you are after an active lifestyle – Vancouver is the place to be.

For a quieter weekend, you can also pop down to the markets on Granville Island and wander through the stalls. Follow it up with an Italian ice-cream and an espresso while you watch one of the frequent buskers, comedians and entertainers. This place has it all!

Banff has 3 ski resorts right on its doorstep. So many choices!!! But with choices comes decisions. There is quite the collection of passes…