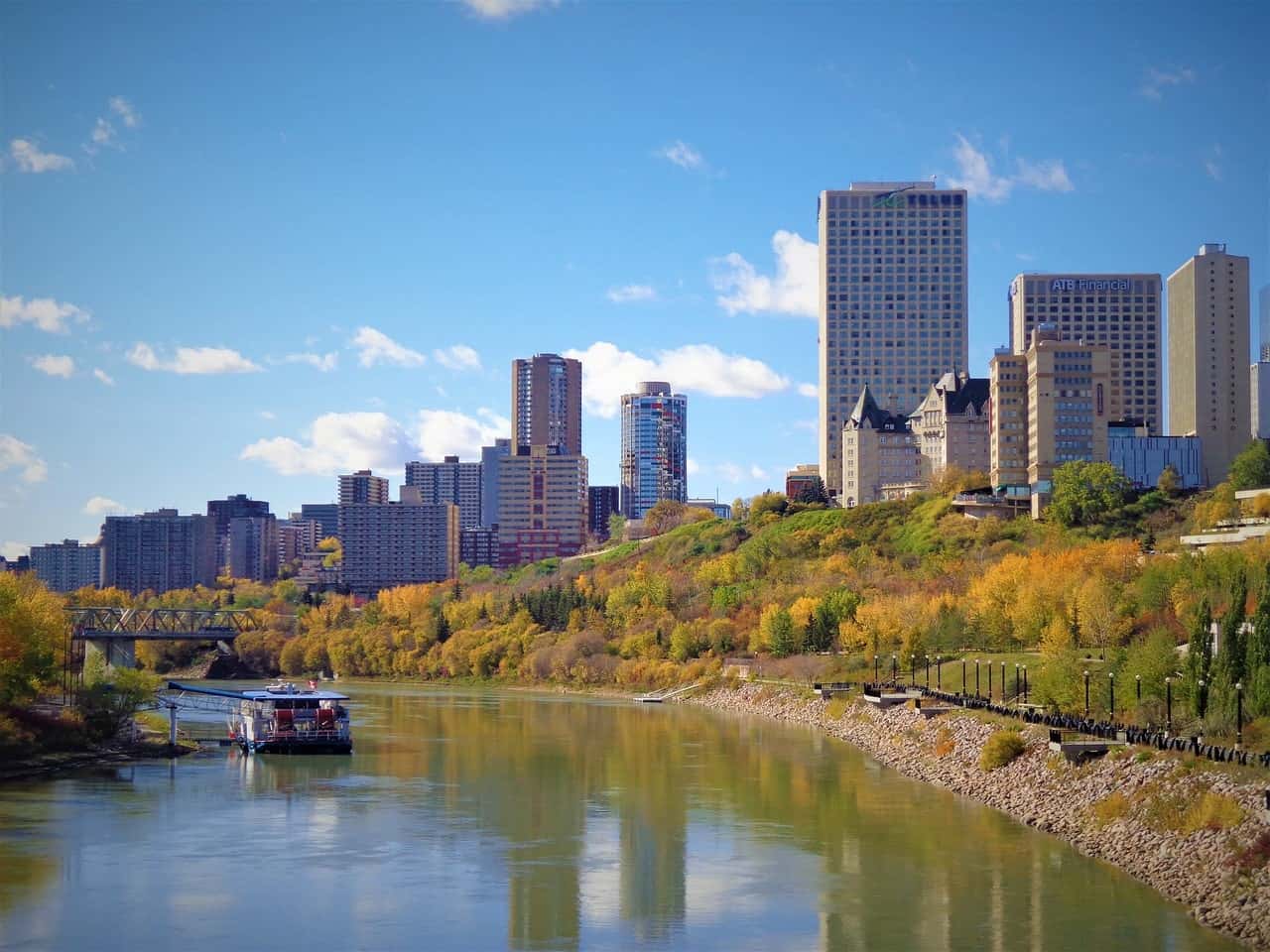 The capital city of Alberta, Edmonton, lies on the North Saskatchewan River and has a population of around 1,300,000, which makes it Alberta’s second-largest city.

The city is the staging point for large-scale oil sands projects in northern Alberta and diamond mining operations in the Northwest Territories.

It’s also a centre for culture, government, and education, and hosts year-round festivals, earning it the nickname ‘Canada’s Festival City’.

Edmonton has a humid continental climate and some of the coldest winters in Canada. Average daily temperatures range from a low of −10°C in January and an average maximum of 23°C in July.

Temperatures can even exceed 30°C anytime from late April to mid-September and fall below −20°C in winter. ​​​​​​​

When you first arrive in Edmonton, you should have some short-term accommodation booked so you have a warm place to stay while looking for something long-term like an apartment.

Hostels are a perfect base to stay in and you’ll find like-minded travellers who can offer advice on jobs and finding accommodation.

Hi Edmonton is located just off Whyte Avenue and is a good home base close to the city’s eclectic arts and entertainment scene. You only have a short walk to the River valley parks system, North America’s largest continuous urban parkland, and it’s a quick bus ride to the West Edmonton Mall.

Every room has free Wi-Fi and you can book into a dorm or a private room. There’s a BBQ, free linen and towels. a washing machine, outdoor terrace, and games room.

It’s more of a cheap hotel than a hostel but still acts as a good base for newcomers to Edmonton. It’s also located a short walk from the Ice District including Rogers Place and Grand Villa Casino, The Art District with the Citadel Theatre, Winspear Centre, and Royal Alberta Museum.

Each room has air conditioning, blackout curtains, a Flat Screen TV, Wi-Fi, a private bathroom, and a coffee maker.

Staying in a hostel long-term is not a great option, so unless you get a job with accommodation provided, you will have to look for an apartment or house to live in.

Another good short-term option for you might be university accommodation. The University of Edmonton offers dorm-style rooms May through August with:

You could even stay here for the whole summer!

Choosing Your neighborhood in Edmonton

The south end of Edmonton has some lovely areas such as Haddow, Henderson Estates and Ogilvie Ridge. These neighbourhoods have comparatively low crime rates and are typically family-friendly and safe.

Old Strathcona is the main arts and entertainment district, a shopping hub, and is close to the University of Alberta.

The popular Whyte (82nd) Avenue buzzes with an eclectic array of shops, bars, and restaurants and runs through Garneau, Queen Alexandra, Strathcona, and Bonnie Doon.

Over 100,000 people live in Mill Woods, which is comparatively cheaper than many other southside neighbourhoods.
Summerside, Ellerslie in the southwest of the city is a quiet residential area with many new houses and apartments. The bus service is great, although many people choose to get around by bike during the summer.
Lake Summerside is a man-made lake with a playground and boats. You’ll be swimming in the summer and skating in the winter!

Just west of the centre of Downtown lies Oliver, one of the city’s oldest neighbourhoods.

Another old part of the city that’s great to live in is The Boyle Street area. It’s just east of the downtown core and is a melting pot of cultures.

Here you’ll discover West Edmonton Mall where there are plenty of places to shop, eat and hang out. Safe, friendly areas to look at include Glenora, Parkview, and Crestwood.

Central-west Westmount may be one of the more desirable neighborhoods in Edmonton. Originally developed in 1910, it still retains its old-world charm. There are lots of shopping areas in this district, including 124th Street and 102nd Avenue.

With its own shopping district and golf club backing onto the River Valley, The Highlands is a popular choice for people settling in North Edmonton.

Crime is concentrated in some northeastern neighbourhoods such as Abbotsfield, Beverly, Hermitage and Norwood. Downtown also experiences some problems at night, particularly in the Chinatown and McCauley areas.

However Northwest areas such as Castledowns and Oxford are considered safe and friendly areas to live in, and nearby communities such as Beaumont, Stony Plain, St. Albert, Sherwood Park, and Leduc are popular as housing costs are lower than within the city.

Depending on where your job takes you, it shouldn’t add more than about 20 minutes to your drive!

*These rates are subject to change.

Websites for Accommodation in Edmonton

Going on a working holiday to Canada? Get tips on finding a job, the top employers and more by signing up for our free jobs kit.