We have been in Canada almost a month now and on some scales we have done a lot but on others we have barely touched the surface. For one there are numerous touristy things to do in Vancouver; Prospect Point, Granville Island Markets, Capilano Suspension Bridge and so on. We have done none of these, bar a quick spin around Stanley Park. We haven’t even done any mountain biking. It’s hard to go off spending money when you don’t have a job and you can quickly see your reserve cash diminishing. So until now we did what any typical Irish holidayers would do in this situation, we cut down on touristy stuff and spent more time in the bar, thus spending way more money in the long run, now that’s fuzzy logic for you. So here we are one month later with a budget that was spent in our first week in whistler. We have actually got a lot done in the first month; A 10 day holiday, rented an apartment, , got phones, social insurance numbers, furnished an apartment for $450.00 see list below. 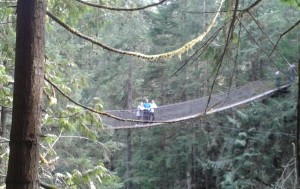 However all that’s all about to change, last weekend we got a taste of the Vancouver life we came here for. On Thursday we relived our college days and went to a night club called the Roxy, Saturday we explored the Night life central of Vancouver in Gastown which is really cool spot with lots going on, then Sunday we had a lie in and went night snowboarding on Grouse mountain followed by A&W Burger (Canadas Supermacs) and to top off the bank holiday weekend we went to Lynn Canyon Park with some new friends on Sunday and did some cliff jumping into crystal clear very cold rock pools. 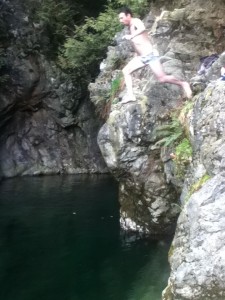 I have been very lucky on the work front, within a week of being in Vancouver I was called for 3 interviews and the following week I did 2 interviews and was offered them both, now this is very strange to me. I have come from Ireland where there is a mentality that we are very lucky to have jobs. I also spent time without work when I came back from travelling and have since spent 2 years travelling around Ireland chasing work and living away from home. So I’m no stranger to the hardships of finding work. Now I was faced with a situation where I had to choose between 2 jobs……….. Long story short I chose the job with less money and better prospective for the future (also way closer to home). I spent a lot of time networking on the run up to coming over here and in the end I came across Ruairi from www.moving2vancouver.ca who pointed me in the direction of Heather James who turned out to be a great help and set me up with my current position.

My brother set me up with a friend of a friend from Leixlip who set me up with the second interview. Both of these jobs were in the greater Vancouver area. The third interview was for a company in Trail B.C. (9 hours from Van). The money was huge but would be living in a small mining village in the middle of nowhere without all the excitement of the west coast.

This site has a great jobs facility for all over Canada: https://workingholidayincanada.com/133/jobs/

Finding an apartment was quite easy (for me), Ruth did all the admin work, choosing which one was our favorite was way harder. There are a few locations that we were considering all of which would be great to live in; the West End, Gastown, Yaletown and Kitsilano. However the minute we did a lap of the West End we had our heart set on it. So Ruth picked out about 12 apartments in that location and we ended up picking a place near Sunset Beach but (luckily) they wouldn’t let us rent it as the lease was for a year and our visas only had 11.5 months left (more fuzzy logic, the place is lying empty now till at least the 15th). Leases over here all start on the 1st or the 15th of the month. So in a nutshell we ended up where we are which is by Coal Harbour in Downtown and walking distance to the beach and Stanley Park, so were bleedin’ over the moon (very happy).

In order to rent the apartment they wanted to do a credit check which was non existent for us and they wanted job references and previous landlord references. This had us quite nervous as neither of us had jobs and neither of us any credit history. So we had to make up jobs and gave a couple of friends’ numbers who we said we were working for. They rang Ruth’s friend and her friend backed up our story, so we were all set. Once we had jobs, our credit history didn’t matter and they weren’t bothered ringing an Irish number.

So its been a busy period and all is happening at a monumental pace, which is keeping us on our toes. We are loving every bit of it though. Lots of excitement lies ahead. Ruth has been doing great work finding apartments and furniture and pretty much organizing everything for us. So now were nearly sorted, she can start to focus on getting work. I think shes enjoying the lady of leisure life though!!!!!!!! The weekend is nearly upon us so she’ll have to sort out something fun for us to do……

Finding affordable accommodation in Banff feels as good as winning the lottery. Although I fear there is no magic answer to the problem I…